Diass (Mbour), 31 August (August) – Traffic at the Blaise Diagne International Airport in Diass recorded a growth of 1059.88% between the period of severe travel restrictions linked to Covid-19 in 2020 and the year 2021, revealed on Tuesday the general manager of the AIBD, Doudou Kâ.

Mr. Kâ was speaking at a meeting to coordinate and present the financing strategy for urgent projects of the air and tourism hub of Senegal. This
meeting was held at the AIBD, under the chairmanship of the Minister of Tourism and Air Transport, Alioune Sarr.

He took advantage of this forum to provide clarifications following the publication of a ranking placing the airports of Abidjan (Ivory Coast) and Lomé (Togo) ahead of AIBD.

I would like to respond to a ranking which indicates that Togo and Côte d’Ivoire are ahead of us. In reality, the authors have only looked at inter-African traffic, that is to say sub-regional traffic,” said Doudou Kâ.

If we take into account only this traffic, Togo, through its position as a sub-regional hub, through the company Sky, is now in first position. But if we consider the traffic in a global way, “when, in 2020, Senegal was in Covid period, at 1.1 million passengers, Togo was at 600,000,” he said.

And when we are at 2.6 million passengers, they are at 900,000. So it’s not comparable. And besides, Dakar and Lomé airports are not the same hubs,” he said.

The DG of AIBD reminded that if several countries can be part of the same hub, Senegal does not position itself as a sub-regional hub but rather as an intercontinental hub.

“Therefore, this should be specified and conveyed. Our objective is to be a hub between Europe and Africa and between the United States and Africa. Other countries in the sub-region, such as Togo, present themselves as hubs for the sub-region. So it’s totally different,” said Doudou Kâ.

According to him, AIBD keeps its place as leader of the sub-region, after Casablanca (Morocco) and in competition with Abidjan (Ivory Coast) and Accra (Ghana). “However, our direct competitor is Casablanca,” insisted Mr Kâ.

“This means that we are now in good shape, in the best conditions for our financing strategy,” the AIBD CEO insisted. 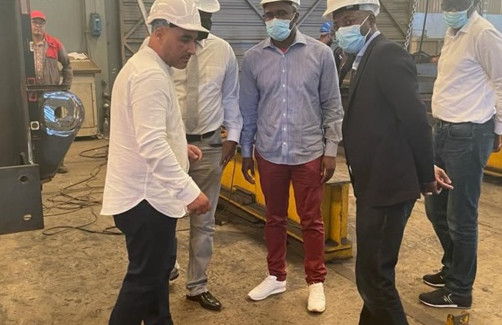 CASABLANCA: AIBD on a mission to finalise the infrastructural design of the MRO steel structure hangar

Diass (Mbour), 26 August (APS) – The national airline Air Senegal will launch next Thursday a flight between the B …